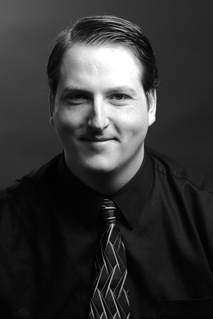 Christopher A. Smith was named Music Director of the Badger Chordhawks Chorus in February of 2016. Two months later, he led the group to dual titles as Division One’s Most Improved Chorus and Plateau AA Champions. Since then, Christopher’s short yet storied tenure has seen the Chordhawks’ first appearance with the Beloit-Janesville Symphony in over a decade, as well as their first ever holiday concert, which is fast becoming a tradition in the surrounding area.

A 2002 recipient of the Chordhawks’ Vocal Scholarship, Christopher now brings more than a decade of collective experience as a professional singer, music educator, and arts administrator.

Hailed for his “remarkable tenor” (Isthmus), “flawless technique and . . . supremely beautiful voice” (Composer David Edgar Walther), and “unusual dramatic talent, interesting presence, and vivid projection of text and music” (SOT), Christopher continues to perform lead roles and solos with opera companies, symphony orchestras, and in major concert halls throughout New York, New England, and much of the Midwest. He is featured on more than a dozen different recordings, distributed internationally; his latest album entitled “A Circus of the Soul” is scheduled to be released on the Albany Records label some time next year. He has won awards at the Metropolitan Opera Auditions and many other national music competitions. He is also a widely respected and sought-after interpreter of new vocal music and to date, has collaborated with more than a thousand composers from across six continents.

As a teacher, Christopher is a two-time consecutive recipient of the President’s Volunteer Service Award from President Barack Obama and a full member of the National Association of Teachers of Singing. He has taught music/voice since the early 2000s: privately and also in schools and colleges across Massachusetts. He has worked with students of every age, every voice type, at every level, and in just about every style; those students now appear on international stages, have placed on American Idol and in other prominent music competitions, and been admitted to prestigious conservatory and artist training programs including those at Julliard, the Manhattan School of Music, Eastman, the Cleveland Institute, the Academy of Vocal Arts in Philadelphia, and many others.

Christopher is also recognized as a “trendsetting” (Cape Ann Beacon) leader in the field of arts administration. He has held more than a dozen senior management positions in the music industry on both the business and artistic sides. He notably served as General Director of the Boston Metro Opera, Interim Director of the Boston-International Contempo Festival, and as Chief Executive of the Biographics Consulting Group. His other previous positions include, among others, Chairman of the Opera Alliance of Greater Boston (precursor of the Boston Opera Alliance), Interim Music Director of the OPERACAPPELLA Ensemble, Interim Artistic Director of New Music New England, and Resident Conductor of The Acting Singers Project. He has also mentored a generation of arts administrators who now lead some of this country's finest institutions.

In addition to his work with the Chordhawks, Christopher is also Director of the Youth Choirs of Southern Wisconsin and regularly consults for arts organizations nationwide.